It’s a discovery that turns an ordinary moment into an extraordinary one. It’s a feeling so good that consumers gave it a name – Targét.

But with competitors trying to get rid of in-store shopping for good, Target needed to put a stake in culture and remind people of the irreplaceable magic of shopping at Target.

So, we created a fall style campaign to evoke that very spirit. The colorful, poptimistic visuals are all accompanied with words that rhyme with Targét—without Target ever explicitly saying the word.

We premiered a :30 anthem film during the 70th Primetime Emmy Awards. And, because it isn’t a Target commercial without an iconic track, we partnered with funk/soul legend Chaka Khan to spread the Targét feeling with her latest single, “Like Sugar.”

We adapted the campaign to Target’s spanish-speaking audience using hispanic insights and iconic pop culture moments, with our spots all set to the smash hit “Medicina” by Anitta.

We also extended the campaign to billboards and murals in one of Target’s biggest OOH buys ever.

And we showed up in pop culture. So fetch. 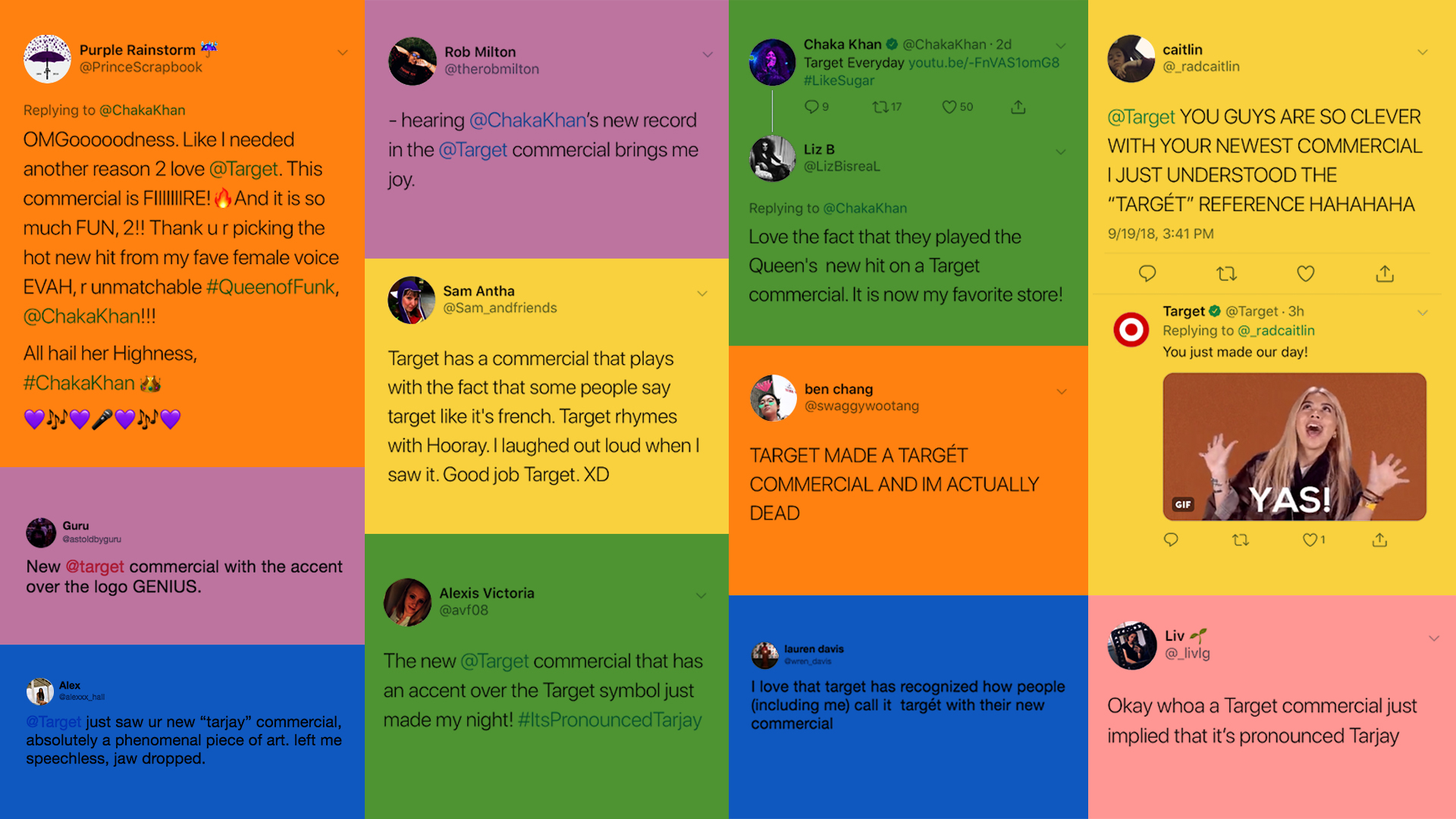 The results? Everyone LOVED it. It sparked a huge conversation on social, and the comments are still pouring in…

This website uses cookies to improve your experience while you navigate through the website. Out of these cookies, the cookies that are categorized as necessary are stored on your browser as they are essential for the working of basic functionalities of the website. We also use third-party cookies that help us analyze and understand how you use this website. These cookies will be stored in your browser only with your consent. You also have the option to opt-out of these cookies. But opting out of some of these cookies may have an effect on your browsing experience.
Necessary Always Enabled
Necessary cookies are absolutely essential for the website to function properly. This category only includes cookies that ensures basic functionalities and security features of the website. These cookies do not store any personal information.
Non Necessary
Any cookies that may not be particularly necessary for the website to function and is used specifically to collect user personal data via analytics, ads, other embedded contents are termed as non-necessary cookies. It is mandatory to procure user consent prior to running these cookies on your website.
Analytics
Analytical cookies are used to understand how visitors interact with the website. These cookies help provide information on metrics the number of visitors, bounce rate, traffic source, etc.
Uncategorized
Undefined cookies are those that are being analyzed and have not been classified into a category as yet.
Save & Accept